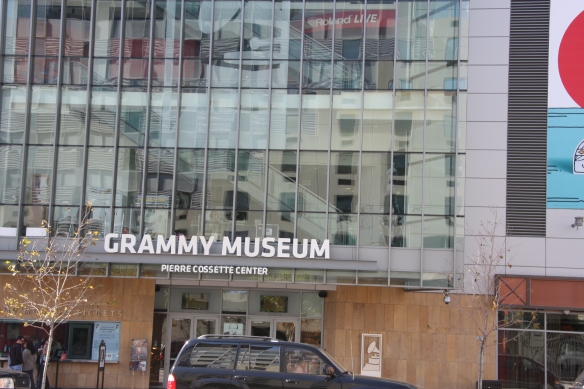 As I was walking to the Muhammad Ali tribute I noticed there were round plaques on the sidewalk and realized they were in honor of past academy award winners and thought that was odd. I assumed they would be found in Hollywood and Vine not downtown LA and then I saw a sign that said welcome to the Grammy Museum.
I didn’t have time to visit this time but I will be back to spend some time inside and let you know what I think about it in a future post.
Here’s a little history about the museum:
Debuted December 2008 in conjunction with the 50th anniversary of the Grammy Awards, the Grammy Museum is billed as an exciting and interactive celebration of the power of music occupying a vibrant new space in downtown Los Angeles. Four floors of cutting edge exhibits, interactive experiences and films provide a one-of-a-kind visitor experience – engaging, educational, celebratory and inspirational.
Quote of the Day:
“There is nothing in a caterpillar that tells you it’s going to be a Butterfly.”
R. Buckminster Fuller